Chromium is an essential micronutrient in the trivalent form, however the hexavalent form of chromium is considered to be a carcinogen. There are a number of methods available for chromium determination. These methods include SW846-6020, SW846-7196 ̧ SW846-7199, EPA 218.6 and EPA 218.6. The choice of method depends on required detection limits and the species of chromium one is interested in determining. 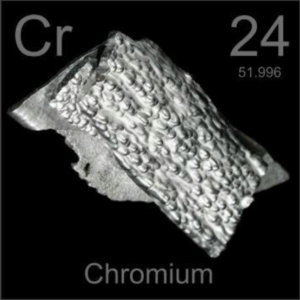 Chromium (Cr) is a steel-grey lustrous metal. It is used in industry in a diversity of products and processes. In the environment, chromium is found in two forms – the naturally occurring Cr III (trivalent) and also Cr VI (hexavalent) which is a byproduct of industrial processes. While Cr III is an essential trace element for human health, there is evidence of Cr VI carcinogenicity in humans thus strong interest in Cr VI cleanup at contaminated sites. The more toxic nature of chromium VI is also reflected in the much lower cleanup standards for Cr VI than those for Cr III.

A site that has entered the Maryland Department of the Environment Voluntary Cleanup Program (MDE/VCP) typically gets analyzed for the Priority Pollutant list (PPL) of metals, as well as, various organic analytes. The PP list of metals includes total chromium. However, if previous site use indicates that chromium is likely to be present or if prior investigation reveals total chromium concentrations in excess of the acceptance criteria for Chromium VI, then speciation of chromium is required. Sampling and analysis for chromium VI will then be requested by MDE. This enables an examination at the site of the most toxic form of chromium. Whereas there is a method specifically for hexavalent chromium, trivalent chromium is calculated by subtracting the hexavalent chromium result from the total chromium result.

Cr VI presents a challenge in that transformation from Cr VI to Cr III occurs rather easily in the presence of organic matter. Surface and groundwater samples contain such matter thus rapid conversion between states is an issue. The EPA has designated 24 hours as the maximum holding time before analysis for Cr VI in unpreserved water samples so that the laboratory test results accurately represent the true field conditions. US National Water Quality Criteria for hexavalent chromium in freshwaters is set at 11 μg/L. Though there is currently no federal MCL (maximum contaminent level) for Cr VI in drinking water individual states are starting to act. California has a stated PHG (public health goal) of just 20 parts per trillion (0.02 ug/L) which can be achieved by newly developed methods 218.6 and 218.7. EPA 218.7 allows the addition of a buffer solution that extends the holding time to 14 days making transportation to the laboratory easier.

To improve analytical results in soil, the 1996 update to SW846 added method 3060A as a preparation method for chromium VI. It is an alkaline digestion method that extracts both the soluble and insoluble forms of Cr VI unlike the previous techniques laboratories were using. Prior to method 3060A, laboratories extracted soils with deionized water. The use of deionized water only extracted the soluble Cr VI forms.

The accepted holding time for Cr VI in soil when refrigerated at ≤ 6 °C is 30 days. According to method 3060A, Cr VI has been shown to be quantitatively stable in field-moist soil samples for 30 days from sample collection. Additionally, Cr VI has also been shown to be stable in the alkaline digestate for up to 7 days after extraction from soil.

To address the problem of conversion of Cr VI to Cr III, researchers at Virginia Tech are developing a technique of capturing Cr VI at the sampling site. This will enable the laboratory’s test results to better represent the conditions in the field. The specific types of chromium will be absorbed and stabilized on a plastic membrane. This technique would likely be used in conjunction with existing sampling technology and should not require additional training.

Speciation of Metals: Chromium
There are a number of methods available for chromium determination. The choice of method depends on sample type (e.g. water, soil), the required detection limits and the species of chromium one is interested in determining (i.e. Total Cr, Cr III or Cr VI) as well as compliance with environmental regulations. These methods include (reporting limits are typical) :

Note there is no method for Cr III per se; Values are obtained by measuring total Cr and subtracting Cr VI. Since Cr exists in only the two forms the difference must be Cr III.